Ghost Bosses
What is a ghost boss

A GHOST boss, or just called a "ghost boss" is a boss that has spawned off the map. These bosses cannot be reached by conventional means.

How will I know a ghost boss spawned?

To know if a boss is a ghost boss, DFProfiler's Bossmap will tell you. 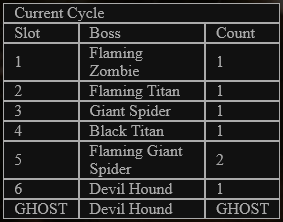 But I see people refer to a "ghost" hound!

What is a ghost hound?

Is there a way I can track these devil hounds?

Yes there is! If you are in the Dead Frontier Series Discord, you can go to the #df1-bot-commands channel and be added to the 'dh' role to be notified about the devil hound spawns and if they are ghost hounds or not.